Context and component actions of the project

European sea bass (Dicentrarchus labrax) is today one of the most significant species in economic terms for the French fishing industry (5000 tons for a total annual sale of 45-50 million euros) and the first target species for recreational fishermen (around 3000 tons per year). 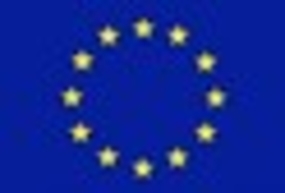 There is still little control of the fishing of sea bass at European and French levels, but thought is underway by the European Commission and member States to propose management measures, as the latest scientific assessments by the ICES (The International Council for the Exploration of the Sea, a global organization for enhanced ocean sustainability, formed by member States scientists in charge of assessing fish stocks and advising the European Commission on management) start to show over-exploitation in some sectors of the North-East Atlantic.

The latest conclusions of the ICES also show a lack of scientific knowledge for better management of the species (classed "DLS" for Data Limited Species) and therefore recommend reinforcement of monitoring and scientific studies within member States.

The main lacking information is :

Consequently, further to a request by the DPMA and in close connection with the bass commission of the CNPMEM (French national committee of marine fishing and farming), Ifremer has started reflecting on the prioritization of research over the next 4-5 years.

Five priority actions have been defined :

Large scale adult marking with electronic tags could help answering the question of the stock structure of sea bass in the North East Atlantic, and also identify the most important migratory paths between coastal feeding zones and offshore spawning areas. High frequency (every minute) records of temperature and depth allow to reconstruct individual trajectories, as opposed to conventional marking. The reconstructed trajectories will allow to address the question of site fidelity (fish returning every year to the same feeding or spawning zone), essential in management terms.

The marking will concern 1200 adult bass in 2014 & 2015, captured on 8 sites over the French North East Atlantic coasts. The tagging surveys will be realized on-board professional ships chartered by the CNPMEM. 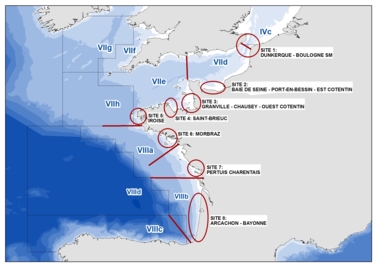 Professional fisheries activities are, for bass and for all exploited species, monitored in France by the DPMA and the SIH. The situation of bass stocks calls for reinforced monitoring, a minima in 2014 and 2015 in order to :

Consequently, reinforced sampling at the auction hall and supernumerary embarkations will be conducted (intensification of the “Obsmer” programme in order to better evaluate discards). Also, bass will be purchased in the south of the Bay of Biscay, at the western point of Brittany and in the north of the eastern Channel in order to monitor sexual maturation, growth and the sex-ratio of the landings. 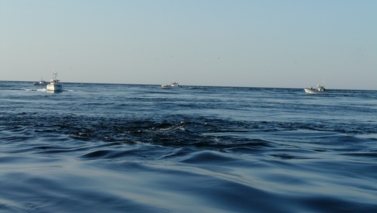 Stock assessment models and consequently management advices, need data from captures (landings, seasonality of captures, distribution of size and age, sex-ratio...), but also juvenile abundance indices. Abundance indices are essential as they allow predicting the number of young individuals to join the exploitable stock in years to come. Depending on whether past reproductions have been successful or not and according to survival of juveniles during their first years of life (variable according to hydroclimatic conditions , food and predation), management measures may be very different. The aim of the action "Nurseries" in the two pilot areas of the Bay of Brest and the Bay of Douarnenez, in addition to acquiring knowledge on juveniles and their habitat, is to define a protocol between 2014 and 2016 to produce an annual abundance index of bass juveniles. From 2017, we may envisage the identification of the main bass nurseries along the North East Atlantic coasts and the regular monitoring of one or two major nurseries per area may then be initiated in order to supply the stock models of the ICES (currently, only the Solent nursery is monitored by English scientists of the CEFAS, and European bass stock estimates by the ICES rely solely upon this source).

Action "Recreational Fishing" : Monitoring of the activity and its captures

The first results of studies conducted in France on recreational fishing (especially those since 2000) have shown the importance of this activity : around 1.3 million recreative fishermen, mainly targeting sea bass (around 3000 tons of catch, and 2300 tons of landings per year ; around 700 tons are released). These studies also enable to start thinking about the monitoring protocol to be instigated in order to reach satisfactory levels of precision in our results in the future.

This action "Recreational Fishing" is conducted with the European Union “Data Collection Framework” (DCF) obliging member States to monitor their national recreational fishing. 2014 and 2015 will concentrate on synthesizing results obtained to date and the definition of an adapted monitoring protocol to be instigated as from 2016.

Professional fishermen often know the position of spawning zones, nurseries, migratory paths of certain species, but those information have rarely, until now, been collected and used by scientists. The aim of this action which has just been completed by the CNPMEM, was to collect, via a questionnaire, empirical knowledge on sea bass at its different life stages by sampling professional fishermen targeting this species along the Atlantic/Channel/North Sea coasts.

The first 3 of these 5 actions constitute the Bargip project whose final objective is to contribute to the implementation of integrated management of the European sea bass populations of the North East Atlantic.

The project is funded by the DPMA (Direction of Maritime Fishing and Aquaculture) of the Ministry of Ecology, the FFP (France Filière Pêche) and by Ifremer. It also benefits from data relative to professional and recreational fishing produced by the SIH (Fisheries Information System funded by the European Union and Ifremer) and the Data Collection Framework.

The project started in September 2013 and will end in December 2017.

The website will be fed throughout the project and up-dated as soon as new information and data are ready to be issued.

During the course of this project, a specific card on the theme "current knowledge on the biology of the European sea bass" will also be edited.